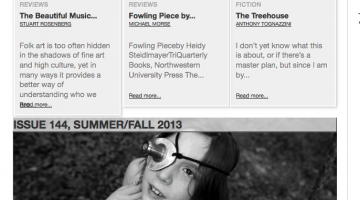 New poetry, fiction & non-fiction, and literary video essays for your reading pleasure is now available in TQ#144. We have...
Read More

NUAMPS announces the launching of Science in Society (http://scienceinsociety.northwestern.edu), a new online “e-magazine” dedicated to offering the public an engaging view...
Read More

NUAMPS Blogs About It

NUAMPS announces the launch of the NUAMPS Blog. The blog (https://mediadesign.it.northwestern.edu/) will explore the processes behind the variety of media and...
Read More

The Big (and Little) Picture

As part of our commitment to the use of progressive technologies in supporting the academic and cultural life of Northwestern, NUAMPS...
Read More

To Timbuktu (and Back Again)

Northwestern University recently began a partnership with Aluka to establish a high-resolution digital photography studio in Timbuktu, Mali. The studio will...
Read More

As part of AT and the Northwestern University Library’s digitization efforts, NUAMPS partnered with the Melville J. Herskovits Library of African...
Read More

Waist Deep in the HD Stream

In 2006 NUAMPS began experimenting with streaming HD video to test the prospects of future media dissemination for scholarly and cultural...
Read More

On May 31, 2006, Joe Levy (Kellogg, ’47) was presented the Kellogg Alumni Master Entrepreneur Award for his support of entrepreneurial...
Read More

If you’ve never seen a robotic fish before, Malcolm MacIver invites you to visit his lab. It is here that MacIver,...
Read More

Amateur rappers with a love for Apple G5’s were awarded top honors in the third annual MediaWorks Promo Contest sponsored by...
Read More

As the latest step in a long-term, comprehensive project to document, distribute, and archive the University’s rich cultural offerings to a...
Read More