It’s generational, or are you still using e-mail gramps ? 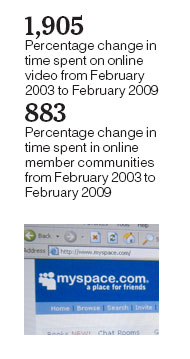 Alongside the explosive growth of online video over the last six years, time spent on social networks surpassed that for e-mail for the first time in February, signaling a paradigm shift in consumer engagement with the Internet.

According to a report released in April by Nielsen, Internet use for “short-tail” sites with large audience reach has evolved since 2003. The change is from portal-oriented sites, like shopping directories and Internet tools like Microsoft Passport, to social networks, YouTube and providers of niche content.

In November 2007, the video audience also exceeded the e-mail audience for the first time, and sites with long-form videos (averaging six to eight minutes) are showing much more growth and user time spent online than those with shorter videos.

Industries hit hardest by the recession — retail, automotive and especially finance — have scaled back online advertising, but consumer products, telecommunications and health care have all ramped up ad impressions, figures consistent with trends in print advertising.

Although Charles Buchwalter, senior vice president for research and analytics for Nielsen, said marketers had yet to master advertising on social media, he predicted that “over the next 12 months a model will emerge” that takes into account “the influence factor” of users who wield disproportionate power.