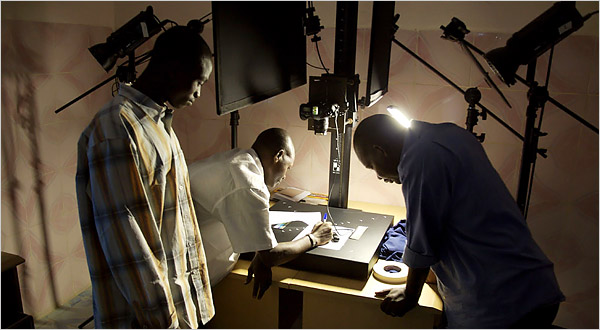 Project Digitizes Works From the Golden Age of Timbuktu

From Timbuktu to here, to reverse the expression, the written words of the legendary African oasis are being delivered by electronic caravan. A lode of books and manuscripts, some only recently rescued from decay, is being digitized for the Internet and distributed to scholars worldwide.

These are works of law and history, science and medicine, poetry and theology, relics of Timbuktu’s golden age as a crossroads in Mali for trade in gold, salt and slaves along the southern edge of the Sahara. If the name is now a synonym for mysterious remoteness, the literature attests to Timbuktu’s earlier role as a vibrant intellectual center.

In recent years, thousands of these leather-bound books and fragile manuscripts have been recovered from family archives, private libraries and storerooms. The South African government is financing construction of a library in Timbuktu to house more than 30,000 of the books. Other gifts support renovations of family libraries and projects for preserving, translating and interpreting the documents.

Now, the first five of the rare manuscripts from private libraries have been digitized and made available online (www.aluka.org) to scholars and students. At least 300 are expected to be available online by the end of the year.

The project to collect the digital manuscripts is being organized by Aluka, an international nonprofit company devoted to bringing knowledge from and about Africa to the scholarly world.

In partnership with a consortium of private libraries in Timbuktu and with financing from the Andrew W. Mellon Foundation, Aluka enlisted media technicians from Northwestern University to design and set up a high-resolution digital photo studio in Timbuktu. A local staff was trained to operate the studio.

Many documents in the graceful Arabic calligraphy are a visual delight. Although the writing is mostly in Arabic, quite a few manuscripts are in vernaculars adapted to the Arabic script, which is sure to pose a challenge for scholars.

“The manuscripts of Timbuktu add great depth to our understanding of Africa’s diverse history and civilizations,” said Rahim S. Rajan, the collection development manager at Aluka.

Researchers have been struck by the range of subjects that attracted Timbuktu’s scholars over several centuries and into the 19th century. Most of the first digitized ones are from the 17th through 19th centuries. The topics include the sciences of astronomy, mathematics and botany; literary arts; Islamic religious practices and thought; proverbs; legal opinions; and historical accounts.

“It is a rich corpus of historical and intellectual literature that is just beginning to become more widely understood and accessible to a broader group of scholars and researchers,” said Mr. Rajan, a specialist in Middle East studies.

In a recent seminar conducted online, members of the Aluka-Northwestern team described some of the problems in starting the digitizing facility in Timbuktu: frequent interruptions of electric power and dust storms fouling delicate electronic components.

“It wasn’t as bad as other places that I’ve seen,” said Harlan Wallach, director of the Advanced Media Production Studio at Northwestern, who has set up similar installations in Asia. “We blew out a lot more transformers and equipment working on a project in China than in Timbuktu.”

While there may be no substitute for seeing the actual manuscripts, Mr. Wallach said, it is better to read them in the digitized form. Many of the pages are so fragile they should not be handled.

Even if Timbuktu today is a dusty, mud-brick shadow of its past renown, living mainly on the few tourists attracted by its name and legend, the pages of its history are emerging from obscurity and, in some cases, are being disseminated by the speed of light.